This was one of the first recipes I ever cooked on my own. I was about eighteen and had had very little cooking experience. Although it is a pretty humble dish, I was thrilled with the results. The dumplings are sweet and comforting, and so nice on a cold night.

According to Google, there are more gourmet versions of this dish but this recipe I veganised works perfectly. It's fun to make because it has the feel of a camping recipe, like damper, that looks a bit rough and is made using staple ingredients. I may not be making these for a dinner party, but these dumplings are surprisingly delicious and much more than the sum of their basic ingredients. 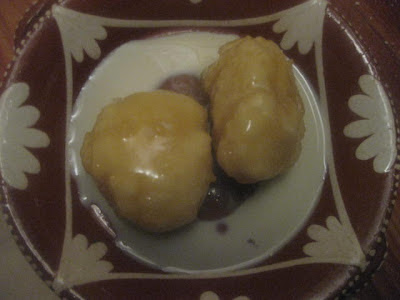 Place the flour into a bowl and rub the margarine into the flour. Slowly add the milk until the mixture forms a manageable dough. If you put in a bit too much milk, just add some flour to balance it out.

Knead the dough for minute or so until it is soft and smooth, then roll into eight balls and set aside. 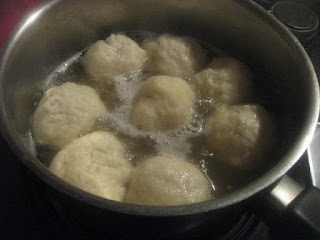 In a medium saucepan, heat the golden syrup, sugar and water until it is simmering. Throw the dumplings in and keep on medium to low heat until they are cooked, about 10 minutes or so.

The sauce will thicken quite a lot during this time and the dumplings expand. Roll them around very gently every now and then to make sure they're evenly cooked in the sauce. It's best to take out a dumpling to test to make sure they are ready because they're awful when they're still doughy. They should be cakey in texture.

I serve the dumplings with a bit of sauce and soy milk over the top. Some kind of vegan cream would be perfect because that sauce is pretty sweet!